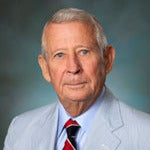 Practice includes a variety of litigation, counseling complex bankruptcy and reorganization matters and expert testimony as to bankruptcy and ethics matters. Joined Lewis and Roca, LLP (then Lewis Roca Beauchamp & Linton) in 1961. Two terms as member of its Policy Committee and Chair of its Bankruptcy Practice Group for many years. Became of counsel to become a partner with his son in Smith and Smith in 2008.  Jerry retired in 2017, but still comes by the office to catch up on the state of legal affairs.

General counsel for R. Carter Pate, Independent Trustee of the NBH Liquidating Trust under the liquidation plan confirmed in the Nelson Bunker Hunt Chapter 11 case in the Bankruptcy Court in Dallas, Texas.

General counsel for Steven S. Turoff, Independent Trustee of the WHH Liquidating Trust under the liquidation plan confirmed in the William Herbert Hunt Chapter 11 case in the Bankruptcy Court in Dallas, Texas.

Counsel for Kaiser Steel Resources and KSC Recovery, Inc. in lawsuits arising out of the 1984 leveraged buyout of Kaiser Steel Corporation, which, prior to its demise, had been the largest integrated steelmaker on the West Coast. All of these claims, against numerous defendants, were filed in bankruptcy court and federal district court in Denver, Colorado.

Counsel for Siemens AG as to its claims and Original Manufacturers Agreement with Storage Tech in the Storage Tech Chapter 11 case in the Bankruptcy Court in Denver, Colorado.

Counsel for MarkAir, Inc. and MarkAir Express, Inc. in their Chapter 11 cases in the Bankruptcy Court in Anchorage, Alaska.

Deputy director of the Commission on the Bankruptcy Laws of the United States, which produced the first draft submitted to Congress of the current Bankruptcy Code (1972-1973).

Arizona State University School of Law in the fall of 1999, Adjunct Professor of Bankruptcy course.

University of Arizona in the spring of 1994, Adjunct Professor of Debtor Creditor course.

Board of Regents and the Board of Directors of the American College of Bankruptcy Professionals, Director and Former Chairman (a distinguished organization of nationally recognized experts in the field of bankruptcy).

American Law Institute, Member (since 1989). Adviser to the Transnational Insolvency
Project and a consultant to the Restatement (Third) for the Law Governing Lawyers and Restatement of the Law, Suretyship. Member of the UCC Permanent Editorial Board's Article 9 Study Committee from 1989-93. Observer as to the efforts of the Uniform State Laws' Article 9 Drafting Committee.

Lawyer delegate to the Ninth Circuit.

Member of Board of Directors of the Ninth Judicial Circuit Historical Society since 1988.

Designated representative of the Advisory Committee on Bankruptcy Rules to the Subcommittee on Attorney Conduct Rules of the Committee on Rules and Practice of the Judicial Conference.

Author, “Standards for the Employment of Professionals in Bankruptcy Cases: A Response to Professor Zywicki's ‘Case for Retaining the Disinterestedness Requirement for Debtor in Possession's Professionals',” 18 Miss. C. L. Rev. 327, 1998.

Co-Author, with Professor Frank R. Kennedy, “Some Suggestions For the Bankruptcy
Review Commission,” 1995-1996 Annual Survey of Bankruptcy Law (Clark Boardman Callaghan) and a series of individual articles with suggestions for the Commission: “Administration,” “Possible New Procedures,” “Debtors Eligible For Relief,” “Reorganizations,” “Disinterestedness,” “Prefiling Disclosures: Fairness to Creditors and Fraud and Criminal Implications of Nondisclosure of Financial Difficulty,” “Avoidance Actions and Claims of Creditors That Become Property of the Estate,” and “Executory Contracts,” “Insolvency Law for the 21st Century,” State Bar of Arizona Bankruptcy Journal, March 1996.

Mr. Smith was the recipient of the Emory Bankruptcy Developments Journal's Lifetime Achievement Award on March 25, 2004. Mr. Smith was also honored by the National Conference of Bankruptcy Judges in November of 2006 as a “Legend of the Law.”

Mr. Smith is also listed in the 2003 edition of the K & A Restructuring Register: America's Top 100, a peer group selected listing of nationally recognized attorneys and financial advisors currently specializing in reorganization, restructuring, insolvency and bankruptcy matters. In 2000, Mr. Smith received the Distinguished Service Award from the American College of Bankruptcy.

Thank you for contacting us. We will get back to you shortly.

Please complete all required fields below.

We have the legal experience and the legal knowledge to provide our clients the counsel they will need in the modern practice of business law. Contact us today!